**Additional photos of the rally can be found here**

NEW YORK — New York Times workers ramped up their calls for the company to end its union-busting with a fiery rally at The Times' midtown Manhattan headquarters today. Chanting “respect our union,” workers demanded The Times end its attempts to obstruct and delay workers’ efforts to form unions and secure fair contracts.

The rally brought together members of three different bargaining units - the Times Guild, Times Tech Guild, and Wirecutter Union - all of whom have faced a variety of anti-union tactics from Times management, including negotiating in bad faith and multiple unfair labor practices. The three units are represented by The NewsGuild of New York. 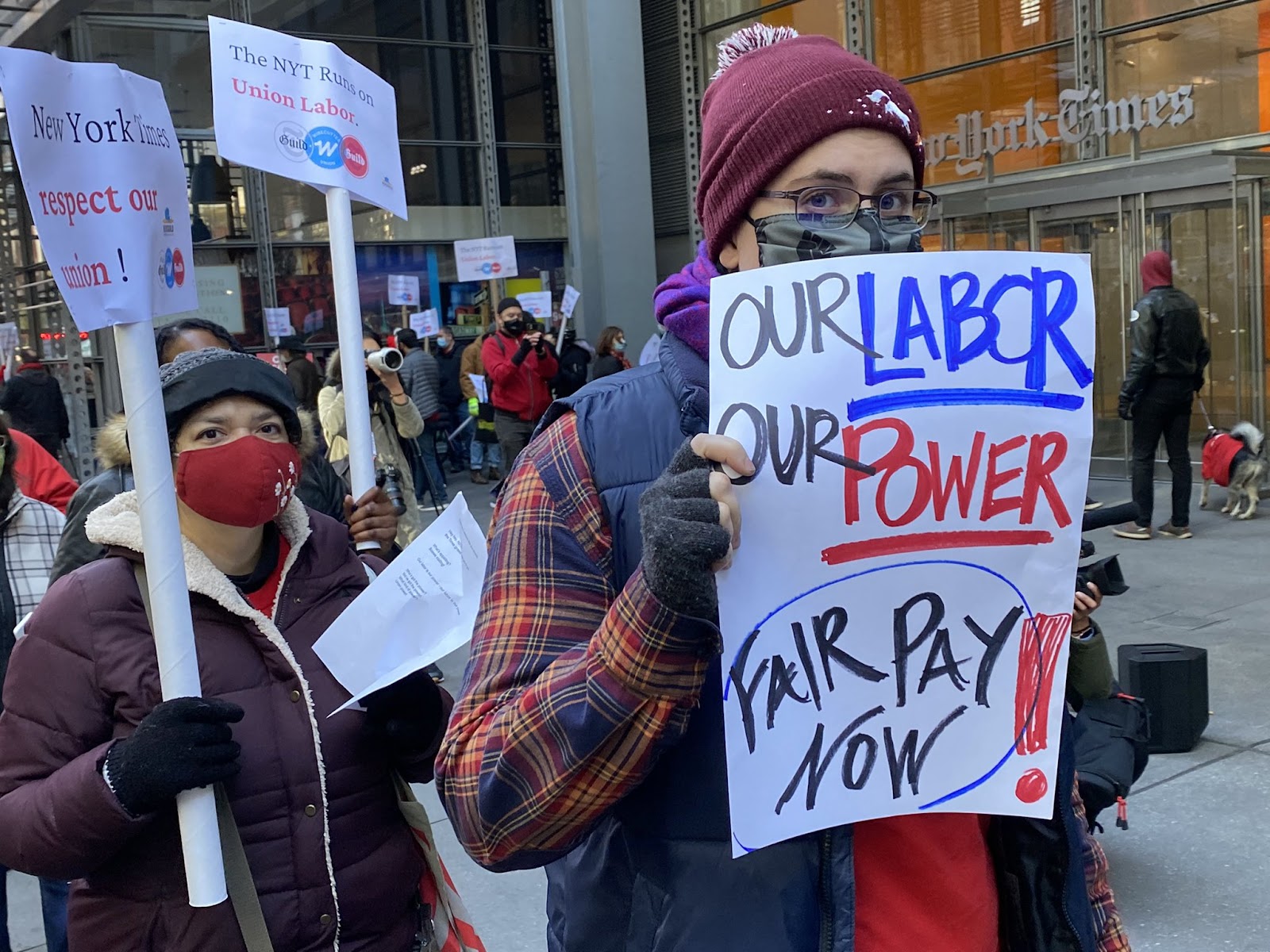 “We're asking The Times to put its money where its mouth is and invest in diversity and equity in a meaningful way,” said Katie Okamoto, a staff writer at Wirecutter and a member of the Wirecutter Union. “The salary floors we're proposing would be a small, utterly affordable investment for The Times, with a powerful return: retaining our highly skilled staff who have ever-growing bills to pay, and making these jobs more accessible for people of diverse backgrounds in the future - something The Times itself has said it needs to improve.”

The Times has faced growing criticism for failing to respect workers’ unions. Last week, the staff of The Times-owned product review and recommendation site Wirecutter announced that workers were prepared to strike during the Black Friday shopping week, the busiest and most profitable week of the year for the site, over the company’s failure to bargain in good faith and to agree to a fair contract despite nearly two years of bargaining. 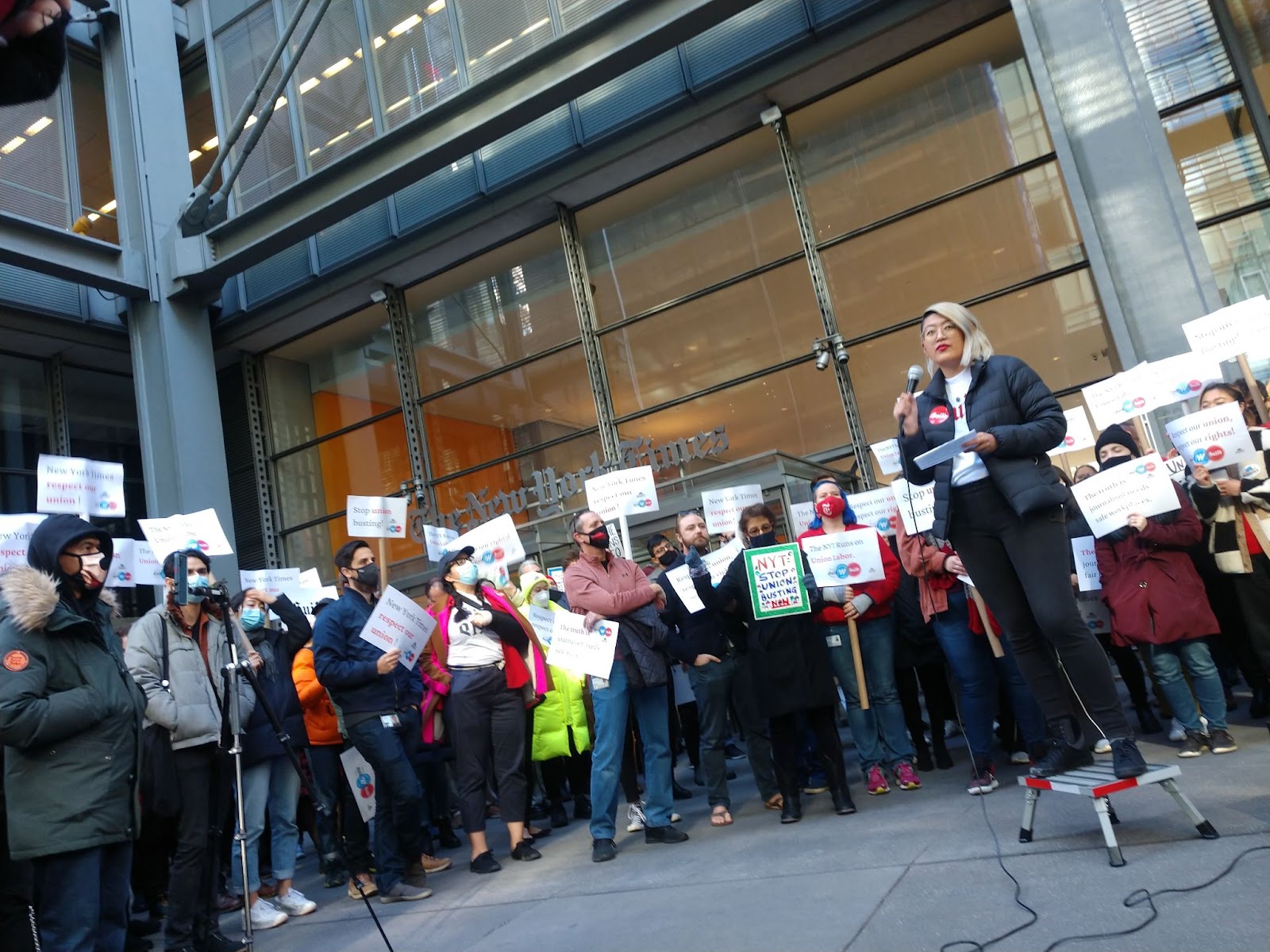 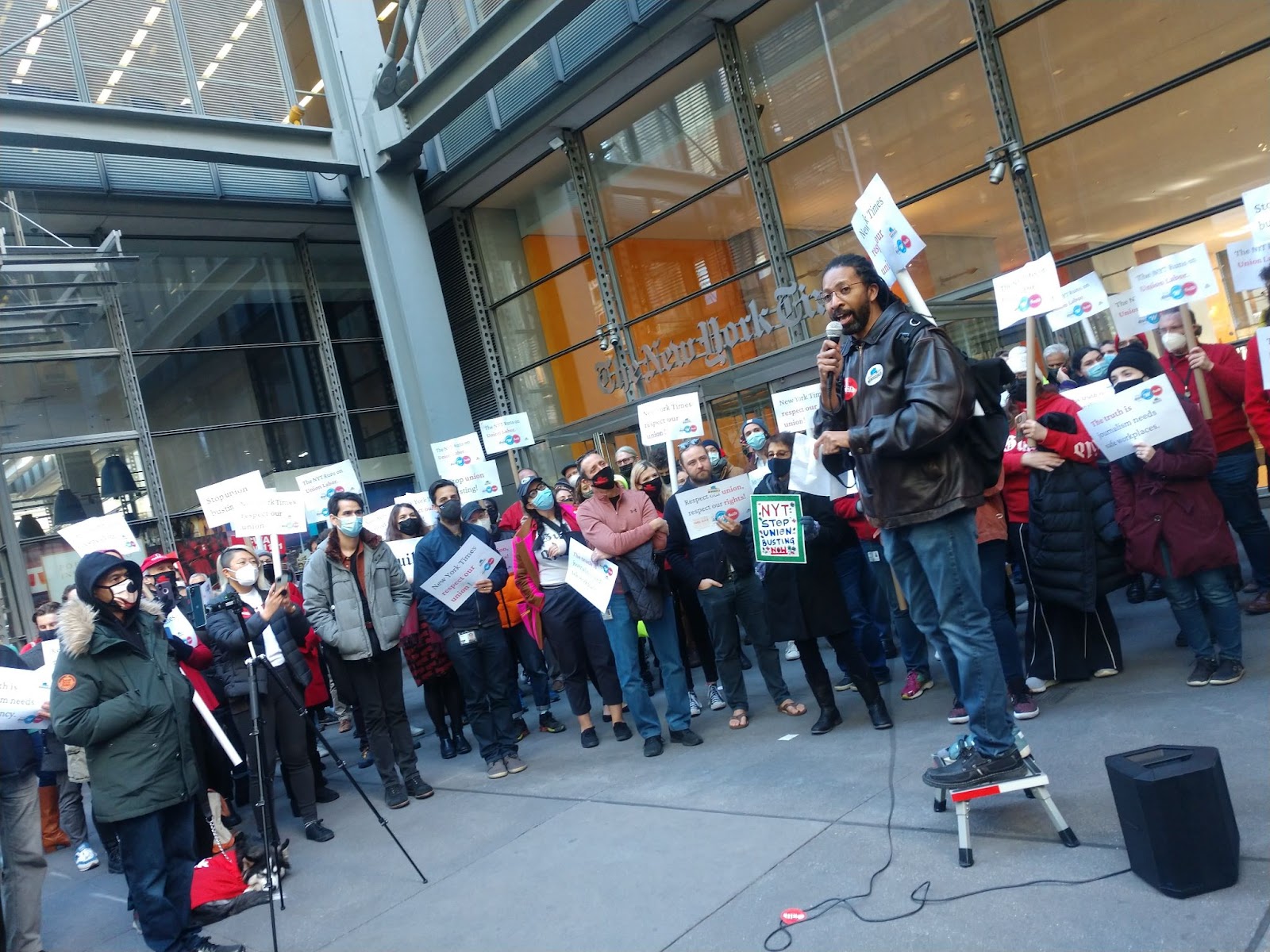 Wirecutter workers have been negotiating for nearly two years over higher pay minimums, annual guaranteed raises, caps on increases to healthcare costs, and banning non-disclosure agreements for cases of harassment and discrimination. Even though The Times’ latest quarterly earnings report shows that Wirecutter has added 10,000 paid subscribers and continues to bring in record revenue, management has only offered guaranteed annual raises of 1%, leaving most raises to management’s discretion.

The Wirecutter Union’s walkout the week of Black Friday was announced in tandem with the filing of an unfair labor practice charge over Times management’s failure to provide complete information required to negotiate over wages. Times management responded to the strike by refusing to meet with the Wirecutter Union before December 3. The members are calling on The Times to come to the bargaining table if they want to avoid a strike. If the Wirecutter Union doesn’t reach a deal, its members are calling on readers and subscribers not to shop through the site on Black Friday through Cyber Monday. Supporters can sign up here to pledge not to cross the virtual picket line.

Tech workers at The Times, meanwhile, have faced consistent resistance from management since first announcing the formation of their union in April. Workers are calling for pay equity, a more diverse workforce, more affordable healthcare, just cause protections, and more support to grow in their careers. Once certified, the Times Tech union would be the largest union for tech workers with bargaining rights in the country. Tech workers have launched a petition calling on The Times to stop its union-busting tactics.

“It is disappointing to see a company as profitable as The Times play hardball with our colleagues at Wirecutter, but it’s sadly unsurprising given the strong resistance The Times has shown towards the Tech Guild. Having members stand shoulder-to-shoulder in solidarity for a better workplace is one of the most powerful things about a union,” said Goran Svorcan, a software engineer at The Times and member of the Times Tech Guild. “That’s exactly what we’re doing here today for our colleagues at Wirecutter, and that’s what we continue to fight for as the Tech Guild: the right to represent and support our fellow workers. We ask The Times to respect our movement to unionize and to sign a contract with our fellow workers. We all look forward to the day when The Times stops these sideshows and once again devotes itself fully to what our CEO rightly holds as our core mission: seeking the truth and helping people understand the world.”

Management has refused workers’ requests for voluntary recognition, engaged in illegal tactics by forbidding union members from showing support for their union, and refused to let workers vote for the union through an expedited online election, even though 70% of members in the union signed a letter pledging to vote yes and calling for an expedited online vote. Today, the Times Tech Guild announced that the NLRB found merit in their Unfair Labor Practice charge, ruling that The Times cannot forbid voters who work with interns from showing support for the union.

In August, tech workers at The Times led a half-day walkout in protest of the company’s efforts to hinder a fair election on a union, including attempts to disenfranchise hundreds of workers from voting in an election at the National Labor Relations Board. The members now await a decision from the NLRB on when their election will be conducted.

"We’ve been bargaining our contract for nine months, and have put all of our proposals on the table, but the vast majority have gotten no response from management so far,” said Davey Alba, a technology reporter at The Times and a member of the Times Guild. “The Times has stated that it values labor and that unions can ameliorate income inequality. But recently, The Times has not been working to come to an agreement with us on a contract that would govern our work lives — and let us get back to our important jobs of producing world-class journalism."

Last month, hundreds of Times Guild members also overcame an attempt by Times management to limit their ability to attend and observe their own contract negotiations.

Times Guild members have been bargaining for a new contract since their previous one expired in March. Management has not responded to the majority of their proposals and refuses to respond to proposals for fair raises, despite the fact that the company is sitting on over $1 billion in cash with no debt. The company has also tried to institute a mandatory return-to-office for certain workers while ignoring the union’s proposals on remote work for months. The workers responded by refusing to come in and filed a ULP charge over the mandatory return.

“The New York Times likes to talk up its progressive values and has devoted miles of column space to explaining how unions can benefit workers - yet it's fighting tooth and nail to stop unions in its own backyard,” said Susan DeCarava, President of the NewsGuild of New York. “All workers at The Times deserve a seat at the table and a workplace that treats them with respect - whether they're reporting the news, writing product reviews that help consumers make better decisions, or building the tech infrastructure that powers the ever-increasing Times Digital footprint. We stand united today with a message for A.G. Sulzberger and Meredith Kopit Levien and Times management: stand true to your values, stop union-busting, and respect our unions."